The Society has learned with great sadness that its long serving trustee Professor Ron Johnston has died on 29th May 2020.
Ron enjoyed a long and distinguished academic career as a geographer. He is the author/co-author of 55 books/monographs and author/co-author of more than 1000 articles in refereed journals/chapters in edited books.
In addition to many honours he was awarded the Prix Vautrin Lud (the ‘Geographer’s Nobel Prize) in 1999 by the Festival Internationale de Géographie. In 2011 he was appointed an Officer of the Order of the British Empire for services to scholarship.
Alongside his academic career he has been a passionate bell-ringer and published two books – Change-Ringing: the English Art of Bell-Ringing and An Atlas of Bells. He was President of the Central Council of Church Bell Ringers from 1993-1996.
Despite his many commitments and interests he has been a very active and engaged trustee of the Society. Lately he has co-authored and edited the Society’s “Guide to Salisbury Cathedral Close”.
Ron will be missed very much and our thoughts are with his widow Rita and their family.

Link to The Times Obituary 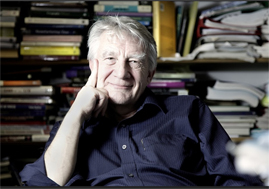