As part of the Society’s educational mission we have invited Salisbury secondary school students of years 11 upwards to write an essay. We are delighted to present this year’s prize winner.

In 2015, an original copy of John Jewel’s Apologia Eccelsiae Anglicanae was presented to my church in Wilton, having been found in the attics of the Wilton town council chamber! Jewel was Bishop of Salisbury, but also a leading Protestant reformer in the reigns of Mary and Elizabeth I, acting as Thomas Cranmer’s secretary. Written in Latin the Apology’s close theological argument was written in 1562, a time of religious upheaval across Europe. However, as is shown by its misplacement for so many years, we can easily say that, in the modern day, such a book is an anachronism, as its theology and method is one that is far removed from that we would recognise today. However, does Salisbury Cathedral Close, which would have been Jewel’s home as he wrote the Apology and already laid out in the form we recognise, also belong in the past, as a relic which is out of step with the 21st Century? Or does the Close remain a “jewel” within the landscape of Salisbury?

According to the Oxford dictionaries, an anachronism is “a thing belonging to or appropriate to a period other than that in which it exists, especially a thing that is conspicuously old-fashioned.” This does not apply to the Cathedral Close. Whilst it may have been planned and built in the 13th Century, the Cathedral Close was not only appropriate to that time period, but it has evolved to suit the needs of the society it serves throughout the centuries. Laid out in 1220, it was initially built to accommodate key figures in the Cathedral, such as the Bishop and the Canons. Areas of it served as a graveyard until it was renovated to become a grazing pasture in the late 18th Century. Since then, these lands have also been playing fields, tennis courts, and now a car park, showing the true flexibility of the Close to suit the era it stands in. There has also been a shift in the position of the Bishop’s Palace, downsizing from the building that now houses the Cathedral School to its present location of South Canonry on the banks of the river Avon via a short stay at Mompesson House. Even the architecture of the Cathedral is never completely static; with the glass roof of the Refectory, there is a modern twist to be found even within an ancient building.

Beyond the obvious draw of the Cathedral, the Close today offers both Secondary and Higher education, in the forms of Bishop Wordsworth’s school and Sarum College, both of which have survived a tumultuous few years for post-16 education. Whilst retaining traditional study in the teaching of Latin, Bishop Wordsworth’s school enables the Close to dabble in far more modern technologies, such as Lego Robotics and Microbit clubs. Meanwhile, Sarum College offers modern, Master’s degree level study, incorporating online learning and Virtual Learning Environments into its teaching; technology that characters such as Jewel would never have even considered possible. 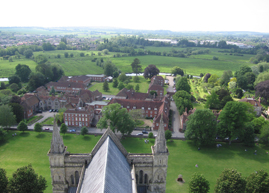 The Cathedral also draws many thousands of people to itself. Some are drawn in through tourism to admire not only the beauty of the Cathedral, and the marvel of its construction, but also more historical aspects, such as the copy of the Magna Carta held here. However, the attendance at the services held in the Cathedral shows much more than just a historical and aesthetic draw. In the ten-year period to 2014, cathedrals in England reported a 77% increase in attendance of their midweek services, growing from 8,000 to 14,200: Salisbury is one of those Cathedrals. This, along with the massive numbers who flock to services such Darkness to Light each year, shows a Cathedral that is very much alive today, and far from an anachronism. On top of this, we can see those within the Close participating in our modern world, especially in the figure of John Jewel’s successor, Bishop Nicholas, who travelled to Paris last October to take part in the summit on climate change held there; a very contemporary issue, and one that would not feature in an anachronism such as Jewel’s Apology – indeed, at the time of its writing, there was no such issue as global warming. Even though on the surface, the concept of a gated community, such as the Close, seems an old-fashioned system, statistics show that such communities are on the rise, with there now being approximately 1,000 in the UK alone. Therefore, the Close is far from an anachronism; it has shifted to become suitable to the modern world, all whilst retaining its original, classic charm. 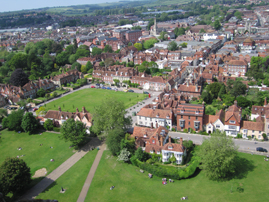 If we may be confident that Salisbury Cathedral Close is not an anachronism, can we logically assert that it can be nothing but a jewel? Much of this depends on definition. Typically, a jewel is a precious object of great value, which has been formed over many hundreds of years and following repeated geological shifts. This is certainly true of the Cathedral Close, as it has survived so many centuries of societal change. The beauty of a jewel is certainly reflected in the work of the many artists who have found inspiration here; most notably, perhaps, JMW Turner and John Constable, in works such as Salisbury from Old Sarum and Salisbury Cathedral from the Meadows respectively. In the modern day also, many artists and sculptors find inspiration, and later exhibit their work in the Cathedral, as is seen in the current glass exhibition, Reflection, and The Walking Madonna outside. The surrounding Close reflects this same beauty, with Mompesson House and both the High Street and St Anne’s gates standing as proud reminders of the beauty of the past. It is no surprise, then, that the Close draws in many local people as well as tourists, to spend time in these beautiful, and partially natural surroundings. The creeping plants that climb up the walls of some of the houses may easily be compared to the naturally evolved beauty of the jewel, and highlight the beauty of the buildings within the Close. 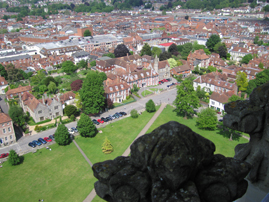 However, there is also a danger in calling the Close a jewel, in thast jewels are typically associated with being the prize and preserve of the rich and wealthy, to the exclusion of others. The value of the Close may well make it a jewel but one would need to be careful not to bring with it the connotations of exclusivity and opulence; ideas which are contrary to the teaching of the Church which stands at its centre. The idea of a community which shuts itself off at night from the city can be perceived as an exclusive one by those on the outside of the walls. With the “voluntary donation” of £7.50 for entry to the Cathedral, it can sometimes seem to visitor and local resident alike that there is indeed an elitist feel to the jewel that is the Cathedral Close. In these cases, the jewel seems tarnished, affected perhaps by economic and social differences which the Christian faith claims not to be governed by. Yet this is only part of the picture. The Close also sometimes shines as a true jewel when it hosts the annual Alabare sleepouts and people from all generations brave the cold stone floors for those who lack homes in the city. South Canonry’s garden party provides vital annual fund-raising for the Sudan Medical Link, and at the Magna Carta grand Liber-tea all the cakes were baked by the prisoners from Earlestoke prison. Events like this enhance the beauty of the Close and I would argue, strengthen its case to be Salisbury’s jewel.

During the Magna Carta event last year, 25 barons were positioned around the city, decorated by various companies for the occasion. Eventually, these were all gathered together within the Close to be auctioned off, raising £59,000 for the Trussell Trust. The Magna Carta itself was signed just five years before the laying of the plans for the Close. It was in an era of liberty, therefore, that Salisbury Cathedral Close was first conceived: that ideal of freedom remains a jewel, and will hopefully never become an anachronism. 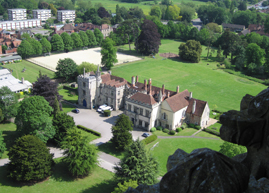