Minutes of the 2015/16 Annual General Meeting

A list of the 27 members attending and 17 apologies for absence received is on file.

Minutes of the AGM held on 23 March 2015 had been circulated to all members together with an Agenda for this year’s meeting. These were approved by a show of hands nem con.

The Chairman, John Wort, announced that he had partially lost his voice and had arranged for the deputy chair to present his report.

At the beginning of the year Priscilla Mackay, a founder member of the Society, announced that she wished to resign. Priscilla has been our representative on the Landscape Committee for much of this period and her horticultural and arboreal knowledge will be difficult if not impossible to replace. The chairman paid a warm tribute to her long and professionally skilled contribution.

In 2015 Arundells applied for permission to hold an additional 24 events per annum and these to be in the gardens. The Society protested this application. Ron Johnston spoke at the planning meeting on behalf of the Society. Councillor Ian Tomes also spoke effectively against the extension. The application was rejected.

In February 2016 Arundell’s trustees resubmitted to hold 24 events in total and anticipated holding 10 of these in the garden. Whilst inclined to support this application the Society made three detail protests. That the word ‘anticipated’ should be strengthened to “not more than ten” events in the garden. We also sought to insist that marquee contractors and the like should offload in the forecourt and not in the roadway and that parking should be regulated by The Cathedral’s traffic team. Again, with support from Councillor Ian Tomes, the “not more than ten” amendment was accepted. Because our other two points involved third parties the council officers were unwilling to accept them as they are very difficult to ‘police’.

Sarum Partnership is a big committee comprising some twenty parties with interests in The Close; Ron Johnston represents The Society. Much of their business this year was taken up with consideration of the Master Plan.

Dieter Scholz is the Society’s Membership secretary and runs the Society’s website – this has been updated to accept i’phone enquiries. Members are encouraged to consult the website from time to time. Circulating our membership by land mail is expensive and cumbersome. What the Trustees would really like is a much more comprehensive list of your e’mail addresses – we still have less than half.

The publication of the Dean’s Master plan necessitated our meeting several times during the Summer to frame our response which is on the Society’s website. It would have been really helpful and a better representation of your views to have been able to invite members’ comments by e’mail. Please send them to SalisburyClose2015@gmail.com

The Landscape committee is now chaired by Sir Hayden Phillips and the executive movers and shakers are the Works Manager, Gary Price who reports to The Canon Treasurer, Robert Titley. We have found them both to be approachable and responsive. If you have any Close appearance or landscape issues do feel free to channel them through the Society.

The siting of the The Magna Carta Yew. Forty cuttings were taken from a Yew and distributed to Cathedrals in the UK during the 800th Centenary Year of Magna Carta. Initially it was proposed that the Salisbury Yew should be planted in the Cloister between the two Cedars. We did not agree with this, and after further discussion the recommended location is now near the Garth East of the Cathedral.

An anonymous donor has gifted the funds for forty new benches for The Close. We thought that this was an embarrassment of riches and the number has been reduced to twenty. The siting of these was discussed on site. If they continue to be re-arranged by visitors they will be tethered to their ‘official’ sites.

The Bell Tower Café hedge. When the café’s terrace had been laid to shingle The Dean & Chapter thought that this was sufficient delineation of the space and applied for a variation order not to replace the hedge. The Society supported their application. However, the planning authorities did not agree and the hedge is to be replaced. We will lobby for this hedge to be extended along the East side of Ladywell up to the Close lawn wall so that the wheelie bins and other café paraphernalia can be hidden.

In December we approached the Salisbury Civic Society to see if they thought there would be merit in forming a relationship. Our roles are similar albeit they handle the whole of Salisbury whereas our remit is just The Close. They agreed and we have become a corporate member of the Civic Society with a seat on their development committee. Dieter Scholz is our representative. Our websites have links. One result of this link is that our last lecture sold out with an attendance of 80 rather than the usual 40/50.

We wrote to the Museum asking them to remove their ugly banner having already agreed this action with Arundells and Mompesson House. We spoke to the Museum Chairman who agreed that the two rows of banners for last year’s Turner exhibition were inappropriate. The curator did not reply to our letter; other than to put up a second banner the following week !!

Treasurer, Eleanor Turner, circulated copies of the Accounts for 2015 to those present.

The disparity between this year’s subscriptions and donations was that a member gave a donation of £100 last year. Lecture receipts reflected a strong attendance of 80 – last year 40.

Additional expenses have been incurred this year in updating the website so that i’phone users can access the site. The Society also made a donation towards a memorial bench for the Close Groundsman, Michael Conio, who had been a dedicated member of staff.

The investments also did not gain in value as much as last year. Altogether the surplus was £688 compared with £1,264 in 2014. This reduction is of no concern. With an annual membership fee of £5 it must be clear that it is not the aim of The Society to make big surpluses. However, the Funds of some £20,000 will enable us to take any professional advice required and protest vigorously on any significant issues that we may wish to espouse.

Dieter Scholz reported that the membership was steady at 103. More members would add weight to our views and he encouraged all those present to ask friends and neighbours to join.

He also re-iterated the advantage of having as many e’mail addresses as possible; it being currently less than half the membership.

The Chairman, John Wort, then revealed that he wished to retire. The Deputy Chair, Richard Owen agreed to act as chairman for a short tenure of office whilst the new Trustees who have been recently co-opted and who will be proposed for election at this AGM find their feet.

The Deputy Chair took opportunity to thank John on behalf of everyone for his contribution as a Trustee for sixteen years and Chairman for the last eight years. His sound judgement has steered The Society around a number of rocks. It has also been a positive pleasure to be a Trustee under his leadership. Under his direction The Society has remained highly regarded by the Dean & Chapter and other organisations with whom it deals. The Society received a warm, hand written note from the Dean for its response to the Master Plan and that was certainly not because we agreed with everything. The members applauded John Wort’s contribution to the Society warmly.

“Whilst not standing for re-election I would like to say how much I have enjoyed the welcome and encouragement from all members over the years that I have been on the Committee.”

6. Election of Trustees and Officers

First it was announced that Chris Dragonetti who had been a Trustee, Treasurer and Membership Secretary for some twenty years wished to retire. His long and skilful contribution was warmly acknowledged by members.

First, the Trustees prepared to continue in office were offered for election.

These were proposed by Ian Henderson, seconded by Jeni Dougan & Anne Moynihan and elected nem. con.

The three new Trustees elect with experience in Law, Manufacturing & Personnel management and Accountancy offer the Society a wide and balanced spread of experience and a dramatic reduction in the average age of the Board !

brings 44 years of post qualification legal experience and was most recently Group Secretary and General Counsel of the Alliance & Leicester Bank. Julian and his wife, Ros live in The Close

has had a career in manufacturing & personnel management including directorships within the Delta metal group. He and his wife, Ellen, currently live in Sarum St Michael within The Close. Gerry has vounteered to be the Society’s Secretary.

is currently Chairman of the five South of England offices of Accountants,Moore Stephens. He was a student at Bishop Wordsworth’s Grammar School,trained in Salisbury and still lives in Salisbury with his wife Barbara.He is approaching retirement.

These appointments were proposed by Joan New, seconded by Lloyd Slater and elected nem. con.

7. There was no other business

The formal meeting concluded at 6.52 pm

SCCPS and the Cathedral’s “Master Plan”

Following the formal meeting Professor Ron Johnston presented the Society’s response to the Dean’s report entitled “After the Major Repair Programme” which is informally known as The Master Plan. A discussion followed which was continued informally over a glass of wine. 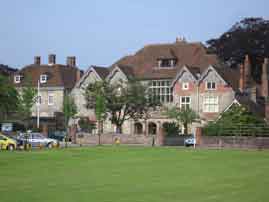 The Wardrobe The Close